If any place that we visit has houseboats, you can be assured that the OH and I will grab a chance to stay on one. We love houseboats that much, and why shouldn’t we, with them being as pretty as they are? Staying on a houseboat is an experience in itself, one that we love indulging in time and time again. This time around, when we visited Kerala, we took the opportunity to stay on a houseboat for a day, again.

The houseboats in Kerala are very different from those in Kashmir, in the sense that the former are quite simple while the latter are elaborate and grand. Keralite houseboats are made of the parts of a coconut tree, while the ones in Kashmir are largely made out of walnut wood, with beautiful carvings and classic, royal furniture. Also, while the houseboats in Kashmir are stationary, the ones in Kerala plow on the waters, taking you to the interior of the lakes, making your stay a thoroughly memorable affair.

We decided to take a houseboat plying on Lake Vembanad in Kumarakom, instead of going to Alleppey. What with the heavy rains in Kerala, it is now off-season. There were hardly any tourists, which translated into hardly any houseboats moving in the lake. 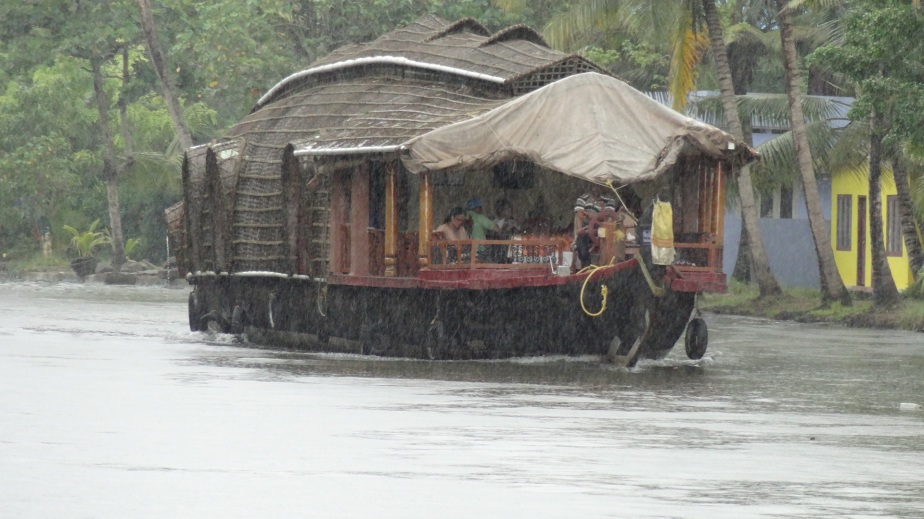 I am always in awe of how an entire house – including a sitting room, two bedrooms and a kitchen – have been constructed atop a boat, and this time was no different. The minute we checked into the houseboat, I spent some time leisurely roaming through the rooms and admiring them. These houseboats are equipped with all modern conveniences, including aircon, television and DVD player. The only source of power is a generator, though, which is usually switched on only late in the evenings, to ensure that the boat does not face a short supply during the night.

Each houseboat comes with a crew including a captain, a couple of cooks and a helper. We were lucky to have two awesome cooks on board, and they cooked some lovely food for us. The one day that we stayed on the houseboat, we were in nature heaven as well as foodie bliss.

If Kerala is God’s own country, I would say Kumarakom is the lap of God. Whichever way you look, the view is gorgeous. Our captain took us to some beautiful parts of the lake, filled with greenery (not that Kerala lacks in greenery in any part!). It was such a treat for our city-jaded eyes!

In the middle of the lake, there is no sound except the chirping of birds and the lapping of the waves against your boat. Music of an entirely different level altogether! I cannot describe the feeling of peace that one feels at this stage – you have to experience it to know what it is.

We got to see some beautiful birds during our cruise. This black one especially charmed us with his antics – dashing into the water at full speed, disappearing inside for a full 10 minutes, then resurfacing and drying out his wings thoroughly sitting on top of a post, only to dunk himself into the water again!

Once it begins to darken, the houseboats are moored for the night. You can choose to get down and explore the stretches of green in the villages next to which they are usually moored. We did just that, and had a lovely time. 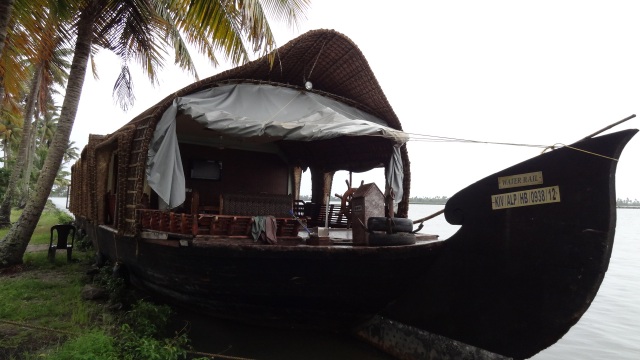 Small waves gently rock the houseboat through the night, and the lapping of the water against the boat lulls you into a sound sleep. Nature’s own lullaby for her children! 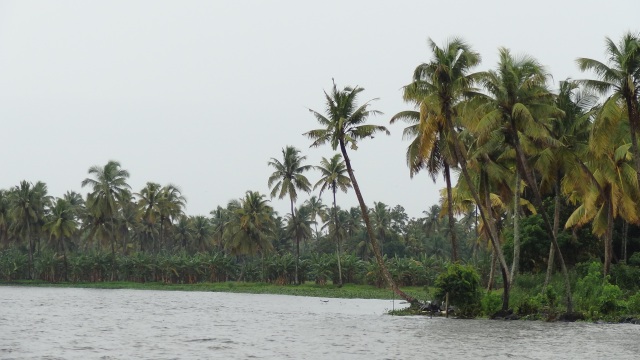 The next day, the houseboat again begins its cruise. Now, you can see fishermen on their daily rounds, searching for the bounty of the waters. Most of them wave cheerily to you as you pass by.

As always, I grew sad as the cruise came to an end and it was time for us to move on. Only the promise of another ride, as soon as possible, from the OH could cheer me up. 🙂

55 thoughts on “Kerala diaries 1: A day on a houseboat”

The Things I Write About